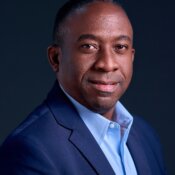 Kevin Simmons is an experienced angel and venture capital investor who has co-founded several investing networks and syndicates in the US, UK, and Africa. He is now a General Partner with pan-African VC leader LoftyInc Capital Management’s (LCM) Fund 4 and a Venture Partner for LCM’s Fund 3. He leads the deal team for LCM which reviewed over 1500 deals in 2021. LoftyInc has repeatedly been recognized as among the Top 3 most active early-stage technology investors on the African continent and much of this is due to Kevin’s role in helping to start the investing activity of LCM in 2013.

Kevin also runs Fund 1 (known as the Afropreneur Angel Group) for LoftyInc which is the most active angel network on the continent which made 86 investments in 19 countries in 2021 alone, and he serves as an advisor to several of LCM’s 170 portfolio companies. Among his notable investments were first investments into 2 of Africa’s 8 unicorns, Andela and Flutterwave, and investments in Moove, Wave, FairMoney, and other leading African technology ventures.

He co-founded Rice University based Valhalla Investment Group which has invested several million in startups including 2 SPACs and a NASDAQ IPO in its 10 years of existence. Kevin is a former startup founder, co-founder, and early employee and has helped launch four technology startups, including UK award-winning Aceleron where he was the Chief Finance and Operations Officer, and notable US-based Innclusive which was featured in The Fast Company; The Washington Post; and Forbes.

Kevin continues to mentor, advise, and gives masterclasses for global incubators in Canada, Africa, and the United Kingdom and is also a current Techstars Mentor. He has been a regular writer for The Innovation publication and is an alumnus of Entrepreneur First and Founder Institute.

A graduate of the U.S. Naval Academy, with service at the United States Military Academy at West Point, he excels at leadership and team dynamics in high-stress environments. He is a former project manager for global oil giant Chevron where he managed complex engineering and construction projects in 6 countries and his work has been featured in the leading industry publication Offshore. A former consultant, Kevin holds advanced management and business degrees from Stanford University, Rice University and the University of Oxford and is passionate about football and motor sports.