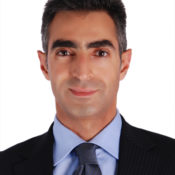 European Bank for Reconstruction and Development

Tarek El Sherbini has 20 years of banking and investment experience gained with major financial institutions – including the last 15 years with the EBRD in London.

Mr. El Sherbini has been responsible with the EBRD for leading debt and equity financing and investments in the food and agribusiness sectors in North Africa, the East Mediterranean and Eastern Europe. He led more than 70 debt and equity investments of close to USD 2 billion in 13 sectors and in 14 countries. In 2011 and 2012, he played a leading role in expanding EBRD’s operations into North Africa and the East Mediterranean.

Mr. El Sherbini has been a board member of several companies, including United Sugar, a subsidiary of Savola Group, the leading food group in the MENA region, with USD 7 billion of revenues, and leading operations in edible oil, sugar, retail, packaged foods, among other sectors.

Mr. El Sherbini graduated with a Bachelor degree in Economics from The American University in Cairo, and he later earned an MBA degree with a specialisation in Corporate Finance from SDA Bocconi, the management school of Bocconi University in Milan, Italy.