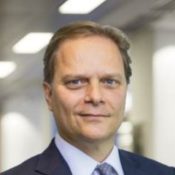 Stephen has been at CDC since January 2019, and currently heads the Financial Services Group team, which oversees CDC’s investment activity via financial institutions and into financial services.

Prior to his current role, Stephen was the Regional Head of Global Banking for Africa, Middle East, and Pakistan at Standard Chartered. He was a member of the leadership team for the Corporate and Institutional Banking business for the combined region, setting strategy and managing the day-to-day business for offices in 15 African and nine Middle East, North Africa, and Pakistan (MENAP) countries. Previously, he held multiple roles with Standard Chartered based in Johannesburg, including Head of Origination and Coverage for Africa and Head of M&A, Africa. Stephen has previously held significant roles at JP Morgan over several years including Managing Director, Head of Investment Banking Coverage for sub-Saharan Africa.

Stephen has a BSc degree from London School of Economics, an MA in International Affairs from SAIS, John Hopkins University and an MBA from the Wharton School.