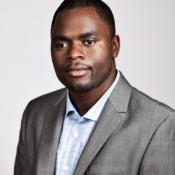 Rodrigue Fouafou is the CEO and one of the global visionaries behind HartNamtemah Inc. an investment firm based out of Toronto, Canada which specializes in vetting, mentoring, investing and strategic planning for African Startups.

HartNamtemah does not only invest in people from a financial perspective but also believes in investing in relationships by getting to know the person behind the idea and vision. Our philosophy is that through the mentorship and development of strong leaders and entrepreneurs, combined with sharing our network of connections, we can shed light on the amazing continent that is Africa. Africa is a region on the move and we must allow it to shine. Over the last six years, we have invested close to $600K USD, mentored over 21 entrepreneurs and have brokered over 15 deals valued at $2M USD one of which is Kiro’o Games, a successful video game studio based in Cameroon.

Rodrigue, affectionately addressed by his colleagues as Rod, has spoken at multiple conferences worldwide on the topic of investing in Africa; including the Annual African Angel Investment Summit in Cape Town- South Africa, the NACO World Angel Investment Summit where he represented Africa in Toronto Canada, for 2017 & again in SEPT. 2018 and at the Africa Trade and Investment Speaker (ATIGS) in DC 2018.

A successful software engineer by trade Rod’s heart lies helping other entrepreneurs and Startups which is evident in his work as a mentor at the World Bank’s XL Africa a program, that works to bridge the gap between African entrepreneurs and worldwide investors. And his work continues to embody leadership by providing support and funding for promising African Entrepreneurs, as the Vice President of ABAN(African Business Angel Network); an Angel Investor Network whose objective is to represent African Early Stage Investors on the global stage. He is also an active mentor and member of VC4Africa and Enablis. For more on Rod follow AfricaConnects on all major social media outlets.

HartNamtemah. Investing in African startups and the people behind them.