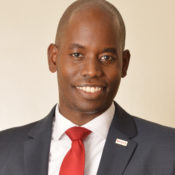 Mr. Paul Murithi Muthaura is the Chief Executive Officer of ICEA LION General Insurance Company Limited having previously held the position of Chief Operating Officer. Prior to this he was the Chief Executive of the Capital Markets Authority of Kenya, which he led from July 2012 to December 2019. In that period, the CMA was: Recognized as the Most Innovative Capital Markets Regulator in Africa for five consecutive years (2015-19); Recognized for its contribution to Capital Markets Stability in Africa (2018); Ranked as the top public sector entity in the Government of Kenya Report on National Values and Principles of Governance (2017); and severally recognized as one of the top employers in the country (2016 & 2018).

Mr. Muthaura was until December 2019 a Board Member of the International Organization of Securities Commissions (IOSCO) and the Chairman of the Africa and Middle East Regional Committee (AMERC) of IOSCO. Over a period of 5 years as an elected member of the IOSCO Board he served as the Vice Chair of the Growth and Emerging Markets Committee and Co-Chair of the Board Infrastructure Working Group among other leadership roles.

Between 2017 and 2019 he was the Chairman of the Consultative Committee of the East African Securities Regulatory Authorities (EASRA) and was a member of the Financial Stability Board Regional Consultative Group for Sub-Saharan Africa from 2014-19. At the national level he has sat on the boards of the Insurance and Pensions regulator. Between 2012 and 2019, Paul was a member of the Vision 2030 Delivery Board which is charged with guiding the implementation of the national economic transformation blue print for the Republic of Kenya.

He remains a Member of the Securities Advisory Board of the Toronto Centre for Global Leadership in Financial Supervision and the Advisory Committee of the East Africa Private Equity and Venture Capital Association on regulatory strategy. Paul is also a Board Member of the ICEA LION General Insurance businesses in Uganda and Tanzania.

Prior to his appointment as Chief Executive, he held various roles in the Capital Markets Authority including Head of Legal Framework, Head of Enforcement and Director, Regulatory Policy and Strategy. Paul previously worked as an Emerging Markets Advisor with the International Organization of Securities Commissions in 2009 as the standard setter charted responses to the Global Financial Crisis. Before joining the regulatory community, Mr. Muthaura was a Senior Commercial Associate with the law of firm of Daly and Figgis, now CMS–Daly & Inamdar.

Mr. Muthaura is an Advocate of the High Court of Kenya and an Honorary Fellow of the Institute of Certified Public Secretaries of Kenya. He is the holder of a Bachelor of Laws from the University of Warwick, Masters in Banking and Finance Law from the London School of Economics and Political Science and MPhil from the Maastricht School of Management. Paul is also an Academy of Executive Coaching (AoEC) certified Executive Coach.

In December 2017, Mr. Muthaura was awarded the National Honour of the Order of the Moran of the Burning Spear (MBS), by His Excellency the President of the Republic of Kenya for his services to the development, deepening and reform of the capital markets in Kenya.