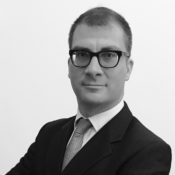 Oliver Cornock has many years of experience in high growth emerging markets having worked in both the private and public sectors. From a background in project finance at HSBC Group, he went on to work with the British Ministry of Defence.

He joined Oxford Business Group in 2004, became Managing Editor for the Middle East in 2006 and was appointed Editor-in-Chief in December 2016. In this capacity Oliver oversees editorial output across all platforms, print and digital. Additionally, Oliver directs OBG Advisory projects and services.

Oliver writes frequently on developing economies and the Middle East – his professional and personal specialisation – and appears as a commentator on BBC, CNN, CNBC and other television and radio stations. He is a regular guest on BBC World’s daily Newspaper Review, as well as BBC Radio 4. He is a frequent speaker at British universities and focuses on the dynamics of growth markets and their relationship with developed economies. In recent years themes of these lectures have included the economics of the Arab Spring, diversification in the Arabian Gulf, global trade patterns, digital disruption and sustainability in commodities based emerging markets.

Oliver has undertaken interviews with many prominent individuals, including an array of heads of state, ministers, Central Bankers and captains of industry. He is a familiar face as a speaker and a well-respected chairman at conferences and events around the world. Over the years Oliver has secured interviews with amongst many others: Ali Al-Naimi, former Saudi Arabian Minister of Petroleum & Mineral Resources;
Amr Moussa, former Secretary general of the Arab League; the late Boutros-Boutros Ghali, former Secretary General of the UN; Gonzalez Anaya, Mexican Finance Minsiter; Maria Angela Holguin, Colombian Minister of Foreign Affairs; HRH Duke of York; Richard Armitage, US Senator; the late Lee Kwan Yew, former Prime Minister of Singapore; President Donald Trump; David Rubenstein, managing Director of Carlyle Group; and Sir Stelios Haji Ioannou, founder of EasyJet.