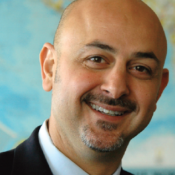 Nabil Fawaz is Sector Manager for agribusiness and general services at the Multilateral Investment Guarantee Agency (MIGA), the political risk insurance and credit enhancement arm of the World Bank Group.

Fawaz has extensive experience in underwriting investment projects in emerging markets and advising clients on structuring transactions to mitigate political risks. At MIGA he has led transactions across all economic sectors including energy, oil and gas, financial markets, and telecommunications. He has helped investors manage political risk in different regions including Africa, Asia, Latin America, and the Middle East. Recently he has led a MIGA initiative involving the mobilization of $1 billion in insurance capacity to retain and encourage foreign direct investment in the Middle East and North Africa. Since the initiative was launched in 2011, MIGA has supported new and existing investments in Egypt, Jordan, Libya, Morocco, and Tunisia.

While at MIGA, he has also led various trust fund initiatives supporting private sector investment in conflict-affected environments including Afghanistan, Bosnia and Herzegovina, and West Bank and Gaza.

Before joining MIGA, Fawaz worked at the World Bank Group’s private sector arm, International Finance Corporation (IFC) in Washington, DC, where he focused on the development of financial markets in sub-Saharan Africa.

Fawaz holds a master’s degree in international management from the American Graduate School of International Management and a bachelor’s degree from Arizona State University, with a concentration in finance.