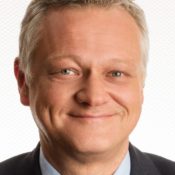 Michael has more than 25 years’ experience in international finance ranging from project finance to private equity. During this period, he has been involved in more than 150 finance transactions on the African continent alone.

In 2000 Michael joint DEG – German Investment and Development Company as Vice President New Business Africa. In this position he was responsible for DEG’s new business in predominantly East Africa. In addition, he was DEG’s key account manager for the company’s telecom projects. Before joining DEG in Germany, Michael worked for over 8 years at Dresdner Bank Group in Germany and Southern Africa, predominantly in credit and corporate banking.

Between 2004 and 2018, Michael has been heading DEG’s regional Office in South Africa in Johannesburg. Since May 2018, he has been the Director of the Department Financial Institutions Africa which has branches in Cologne, Johannesburg, Nairobi, Lagos and Abidjan.

Michael holds an engineering and business administration degree from Karlsruhe Technical University, Germany. Over the years he has hold various directorships of African companies and advisory board seats of various private equity funds. Michael is currently a director of Global Credit Ratings and Beefmaster (Pty) Ltd.