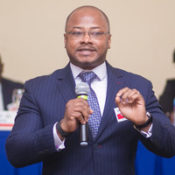 Michael has a multi-disciplinary background in Law, Economics and Finance. He is currently the Vice President & Head, Legal at Gold Fields Limited’s West Africa operations responsible for the legal, compliance and company secretarial affairs.

Before joining Gold Fields in 2010, he was the Company Secretary & Head, Legal & Compliance at SIC Financial Services Ltd (SIC-FSL), an investment bank with US$80 million assets under management. He was a member of the pioneer team that managed and invested the US$10m Bedrock Venture Capital Fund, and represented the Fund on a number of investee company Boards. He was a member of the IMC that run SIC-FSL for 7 months prior to handing over to a new CEO.

He was an associate at Bentsi-Enchill, Letsa and Ankomah where he advised diverse clients including the International Finance Corporation, USAID, Coca Cola Bottling Ghana, Credit Suisse First Boston, Ecobank Ghana, The Trust Bank, the Ghana Stock Exchange, HSBC, Hutchison International and the World Bank. He represented clients at all levels of the Court system including the Supreme Court. Before that, he worked at Lawfields Consulting where he consulted for clients including DANIDA, SIGMA ONE/USAID and the World Bank.

Having passed the Ghana Stock Exchange’s Securities Industry Course, Ghana’s Securities & Exchange Commission licensed Michael as an Investment Advisor’s Representative. The Chartered Institute of Taxation also admitted Michael as a Tax Practitioner in 2016. Michael served as an arbitrator at the Vis International Commercial Law Competition, Vienna and Hong Kong. He was for many years a part-time lecturer in Business Law and Jurisprudence at Zenith University College. He served annually, as a judge, at the Philip C. Jessup International Law Moot Court Competition, USA. In 2015 and 2017, Michael made it to the Legal 500 GC Powerlist: Africa for the 100 leading and influential in-house lawyers/general counsel in Africa. Michael holds the following qualifications: BA (Econs & Geog), LLB, QCL, MBA (Finance), TPG.