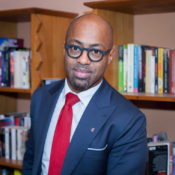 In 2012, Jean-Luc Konan founded the Financial African Company (Compagnie Financière Africaine, COFINA), which became the first African financial institution dedicated to mesofinance. Cofina aims at bridging the missing link between microfinance and traditional banking when it comes to financing SMEs.

Holding offices in six countries across West Africa, the group counts more than 125,000 customers in 2018 and 50,000 projects that were financed with outstanding loans of FCFA 94 billion. Accompanying SMEs in the realization of their projects thus increases investments in the private sector, thereby contributing to the dynamism of African economies.

In Africa, only 6.4% of SMEs have access to bank financing, while they account for nearly 90% of private companies and 33% of GDP. The funding gap is thus estimated at more than 140 billion dollars: a gap that Cofina intends to fill in as an intermediary and start-up incubator in favor of better financial inclusion.

Jean-Luc Konan began his career at Arthur Andersen as Supervisor in the Audit and Control Department. He then occupied positions of responsibility within renowned banks such as Barclays, BNP PARIBAS or CityBank. From 2007, he coordinated the activities of Ecobank in Gabon and Angola, before joining the UBA Group, where he was successively Director and General Manager for Gabon, then Senegal.

Jean-Luc KONAN holds a Master’s degree in Financial Engineering from Toulouse Business School and a DESS in Banking Finance from Paris V University.