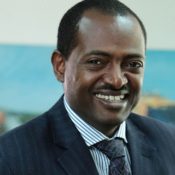 Ermias was the CEO of Ethiopia Commodity Exchange (ECX) for three years and led the media company African Renaissance Television Service (ARTS) in 2018 for a short while. During his tenure with ECX, he prudently and strategically led the effort of the Exchange in building a modern marketing system via the launch of an e-Trade platform which had remarkable contribution to the lives of the rural community and trading houses. Prior to that, Ermias was part of an establishment who founded Zemen Bank in Ethiopia, one of the most successful bank with RoI of 15x multiple just in eight years.

Ermias received his Master’s Degree in international business from Manchester School of Management and a Bachelor’s degree with honours in Computation at UMIST, in Manchester, United Kingdom.

He has over 25 years of technical and leadership experience on the continent and has held various posts together with several Board Directorships including in the Accounting Auditing Board of Ethiopia (AABE), Zemen Bank Board as member of the Executive Management, as Vice President at Zemen Bank.

Mr. Ermias Eshetu was ranked in the 2016 and 2017 ‘Choiseul 100 Africa-Future Economic leaders ‘ for being an active contributor to the economic development of Africa. In 2017, he was also recognized by MIPAD 100 (Most Influential People of African Decent 100) for his various contribution and achievements.

Ermias is passionate about business in Ethiopia and the Africa narrative in general. To that end, he has spoken on many panels and investment conferences in the past 10 years including at the Milken Institute Global Conference, a major Think-Thank in the US. Ermias currently serving as President of American Chamber in Ethiopia and a few other Board positions.